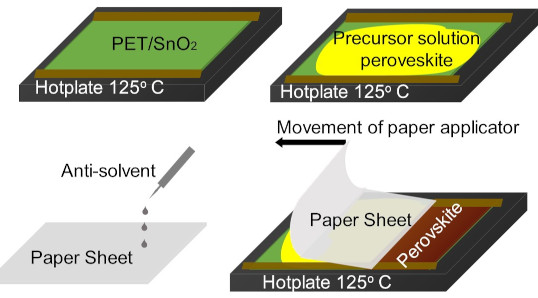 Spin coating is much like children’s spin painting, except that close control of process parameters results in the deposition of a continuous thin even film on the substrate.

If aiming to deposit a poly-crystalline film of a material, the material is dissolved in a solvent, dropped onto the spinning substrate and the allowed to dry.

To improve the structure of the deposited film, or to speed the drying process, a liquid called an ‘anti-solvent’ can be spun onto the drying film. Anti-solvents alter the solubility of the material in the first solvent – they are sometimes also solvents, but in which the material is less soluble.

The Universities of Rome and Zanjan have been working with a solar cell built on a PET polymer substrate. The stack up is: PET substrate, ITO/tin oxide bottom electrode, perovskite, Spiro-MeTAD hole transport and gold top electrode.

Building the cell the conventional way, by anti-solvent spin-coating the perovskite layer, resulted in a cell with 14.9% efficiency.

Instead of using the spin coater, Zanjan physicist Nazila Zarabinia dropped dissolved perovskite onto a stationary horizontal substrate, and then dragged an anti-solvent-soaked piece of paper slowly across it.

Behind the trailing edge of the paper formed a good quality perovskite film – good enough to produce an 11% efficient proof-of-concept once the rest of the layers were deposited.

“We worked on trying different soft applicators,” she said, “the one that work best was paper, possessing the most beneficial properties of porosity and smoothness.”

The method has been dubbed DASSA for ‘deposition via anti-solvent-soaked applicator’, and the team is proposing to both optimise it for higher efficiency and automate it – possibly out of the lab and into the factory.

“We think this simple method will appeal to all those labs setting up perovskite research, since it enables the deposition of the perovskite film incredibly cheaply,” said Rome engineer professor Thomas Brown. “It can also be of interest to groups developing automated printing techniques by applying the anti-solvent, not on the perovskite film as usual, but on the applicator instead. Furthermore, it will be interesting to endeavour to extend this method also to the transport layers for full cell manufacturing.”

The work is described in ‘Simple and effective deposition method for solar cell perovskite films using a sheet of paper‘, published in iScience – full paper available without payment.

There is a video of the DASSA process in action.